The news agency Bloomberg reports that the Alibaba neural network for the first time surpassed the ability of people to read and understand texts. She provided accurate answers to over 100,000 questions based on 500 Wikipedia articles. The car scored 82.44 points, while the best result is 82.304. A day later, AI from Microsoft achieved similar success, gaining 82,650 points.
Farewell to the past 70 thousand years of evolution ... We are leaving.
Simple citizens feel better that a new time is coming, than the leaders of countries. In my office in Tver, three employees asked me to explain how the "Artificial Intelligence" algorithm works. Not a trivial Chinese or American AI, created on the "big data" algorithms and neural networks, and they were interested in how my new algorithm works on the principles of SIS.
It's fantastic, but I managed to explain it all in 15 minutes, and they all seem to understand this. Even academics do not understand this! And then there was an interesting case. My daughter's husband, a simple chauffeur, asked me to explain how the blockade and the crypto currency are arranged. The whole family gathered at the impromptu lecture, which in itself is surprising. The last time they were going to, when I told them about the future era of the Internet. Listened very carefully and, it seems, too, all understood. What's happening?
There are people who rejoice at the successes of Russian programmers in creating "artificial intelligence" and are annoyed by the successes of American or Chinese programmers. There are people who are annoyed by Russia's successes and who rejoice at the successes of other countries. I rejoice in the successes in the creation of AI everywhere and I am sad about the failures that occur in all countries.
Dmitry Panov, General Director of the Technomash FSUE, wrote about the same thing recently about space. "There are citizens (Russians) who are happy with the failures of Russian cosmonautics and welcome the successes of the US There are citizens who welcome the successes of Russian cosmonautics and are happy with the failures And there are citizens who rejoice in any success in space exploration and are disappointed by any setbacks, these latter are OUR people, and they belong to space. "
But all this in the past ... everything is in the past. We recently entered a new world, where everything is already in the past. All your business empires, banks, factories, design offices, shops and small firms - all will soon disappear. They disappear within a few years, dissolve like a haze on the horizon in the rays of the rising sun. All that you had before is already Fleur. The hour has come for a new redivision of the world. The hour of universal new privatization has come. Fleur - not only banks, but also national states. Remained only the global world and the race for "artificial intelligence".
If China's leader Xi Jinping seems to know where the world is heading, then Trump and Putin in understanding what is going on so far at the level of small children.
What most of the world expects tomorrow, most people can not even imagine. The artificial intellect is not coming yet, it's not the mind ... It's much worse so far. While these are stupid machines, they start to rule the world.
И важно это понимать особенно на нынешнем этапе технологической революции. Мы приближаемся к точке невозврата. Unthinking Machines (глупые машины) станут основным катализатором Апокалипсиса. И, наоборот, intelligent machines (умные машины) могут стать его сдерживающим фактором. Мы можем создать умные машины, но продолжаем делать машины глупые? Мир разделяется на две фракции.
And it is important to understand this especially at the present stage of the technological revolution. We are approaching the point of no return. Unthinking Machines (stupid machines) will become the main catalyst for the Apocalypse. And, conversely, intelligent machines (smart machines) can become its deterrent. We can create smart machines, but we continue to make machines stupid? The world is divided into two factions.
Gennady Klimov

Yesterday we went to the Tver art museum. And today we explored the pyramid of Cheops. Two days ago Tver artist Dmitry Mamonov called, asked to look at his painting Apocalypse. The picture is interesting. Today half a day they discussed with the Tver Engineer Alexander Antipov the results of computer simulation of the Cheops pyramid. This is very interesting for me, because I'm engaged in the SIS project - creating super-smart hierarchies that allow building competitive hubs.
And it's more obvious that success in business and engineering is determined not by individual talents, but by a properly organized project hub. The one who wins the hub will be the winner.
So far, I must say, Google, like the Chinese Baidu, is a hundred steps ahead of us, but maybe we will soon be able to overtake and overtake them. Is it even interesting for a few private Russian researchers from "garages" with their family budgets to overtake world corporations with their billions of investments and state support of the most powerful countries?
He who owns an artificial intelligence, he will own the world.
Methodologically, in order to understand "what is intellect", one must make a historical investigation of how it originated. Reason, in our understanding, was the result of the passage of mankind several times through the "narrow neck". The pyramid of Cheops is such a place. I think this is the fourth step.
We have a company in Tver that will some day create a full-fledged "artificial intelligence". Today we found out that Cheops, contrary to popular belief, was never used and was not built as a tomb of the pharaoh. Cheops is part (though very important) of the Giza complex, which was built according to a single plan. Moreover, it is part of a global geographic structure that extends thousands of kilometers. For him a non-random place was chosen. I will not demand much attention from you, but this great pyramid is a kind of time machine, for the calculation of fate tables. We'll talk about this later.
Today we found that the pyramid of Cheops is also a peculiar place of judgment, sorting people - here we have a prototype of the Jewish Ark or Vara of the Indo-European god of Yama. Here, some of the people went to the scrap, and someone in a special pyramid under the command of the goddess Nut, the god-giving birth.
According to the calculations of Alexander Antipov in the pyramid could fit 15 500 people (perhaps the figure is not accurate). These were the so-called thousandths. This means that the total number of people for the sustainable development of the society is 15 500 000. One in 1000 belonged to the elect by God Himself. And yet, not for nothing did the artist Mamonov call me. His painting depicts a moment from the Apocalypse, when the Horseman is on a white horse.
After the phase transition from the old world to the new world (the battle of good and evil, light and darkness), the "beast" and with him the false prophet were cast alive into the lake of fire, burning with sulfur; and the rest are slain by the sword of Him that sitteth on a horse that proceedeth out of his mouth, and all the birds are filled with their flesh. I re-read the Apocalypse today. I'm surprised that the priests are afraid of him so. Very optimistic book. In this book, God overcomes evil.
There is a synergy of the righteous who begin to live in an ideal society. At the end of the Apocalypse, many different figures are cited. Nobody pays any attention to them. "And I looked, and, behold, the Lamb stood on mount Zion, and with him an hundred forty-four thousand, for whom his Father's name was written on his foreheads."
It seemed to us today that these figures are somehow connected with the size of the pyramids and with the optimal size of the project hubs. Everything in this world is arranged in the likeness. Follow our research. Let me remind you that according to the calculations of Alexander Antipov in the pyramid 15 500 people could fit, perhaps this figure should be adjusted to 144 000 people. This is probably the number of maximum synergy. It remains to find these people.
Gennady Klimov 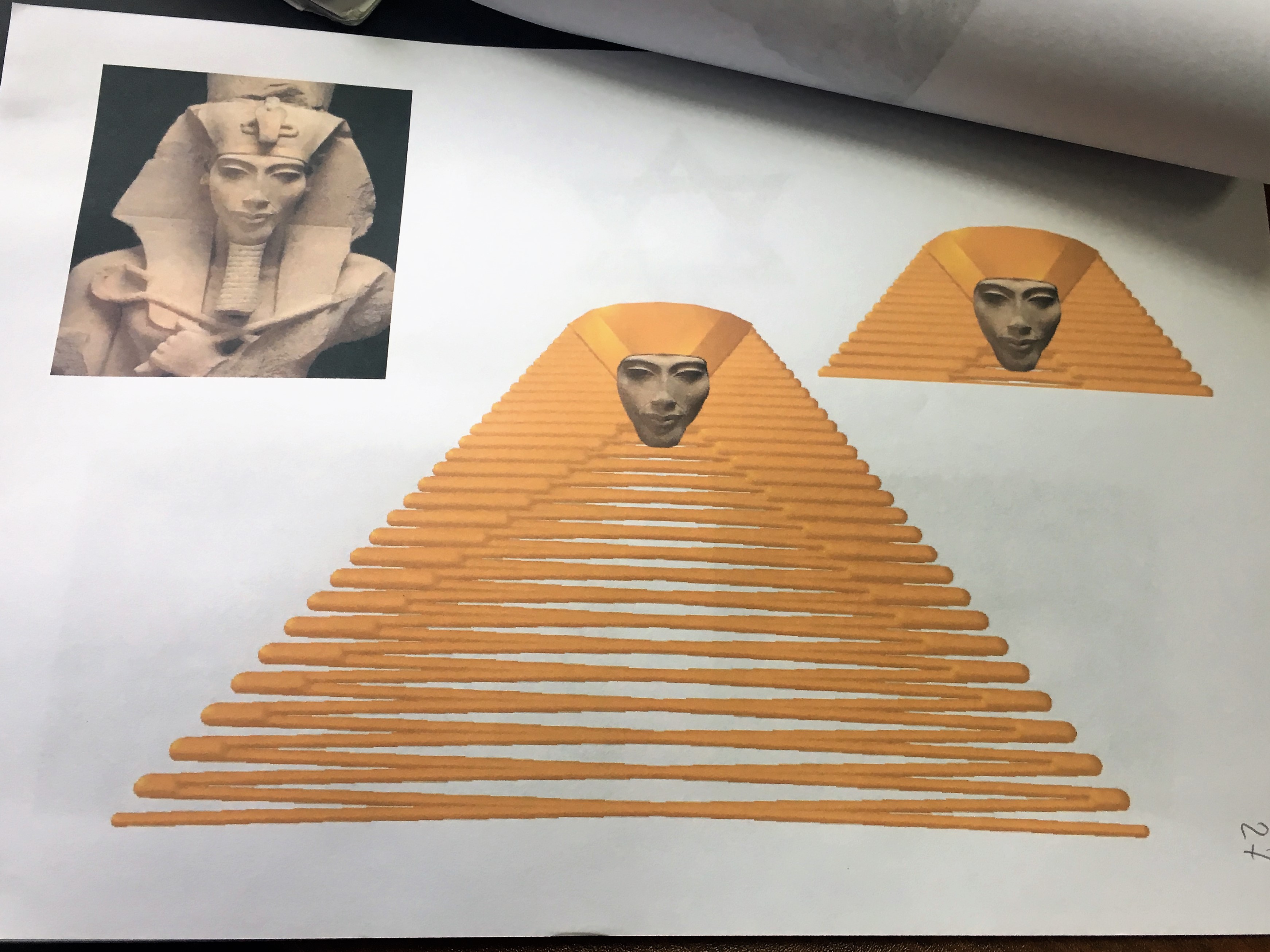